Gwaii Haanas, AKA “Gwaii Haanas National Park Reserve and Haida Heritage Site” is a protected archipelago of southern Haida Gwaii.  The best way, or indeed the only way, to see Gwaii Haanas is by boat. We chose a sail trip. Or maybe the sail trip chose us. In September, when the kids [are supposed to] go back to school, most charter trips dry up. But there was one last trip going out, and it was on Sail Piraeus, a 44’ wooden ketch that immediately makes me want to channel my inner Captain Jack Sparrow. 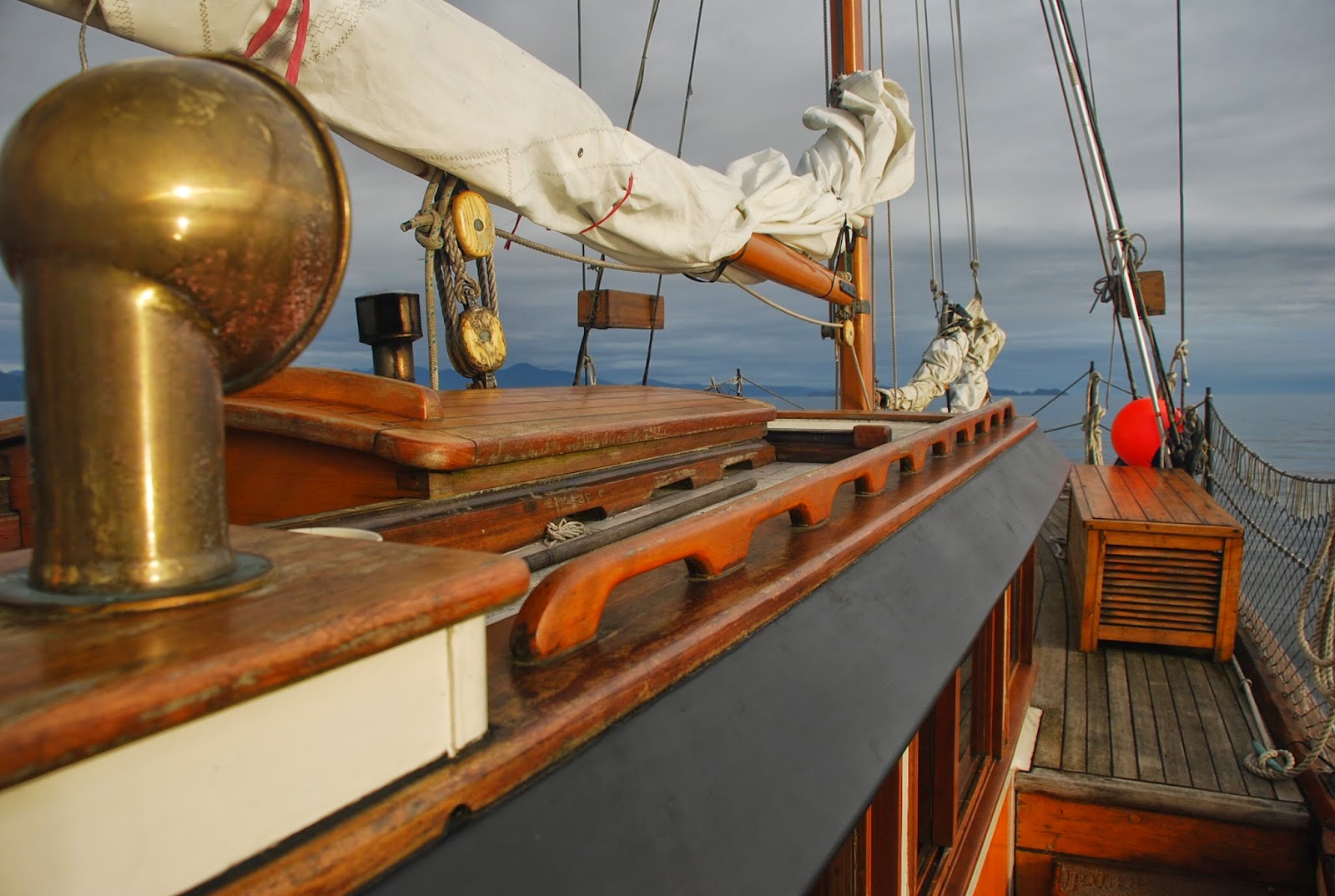 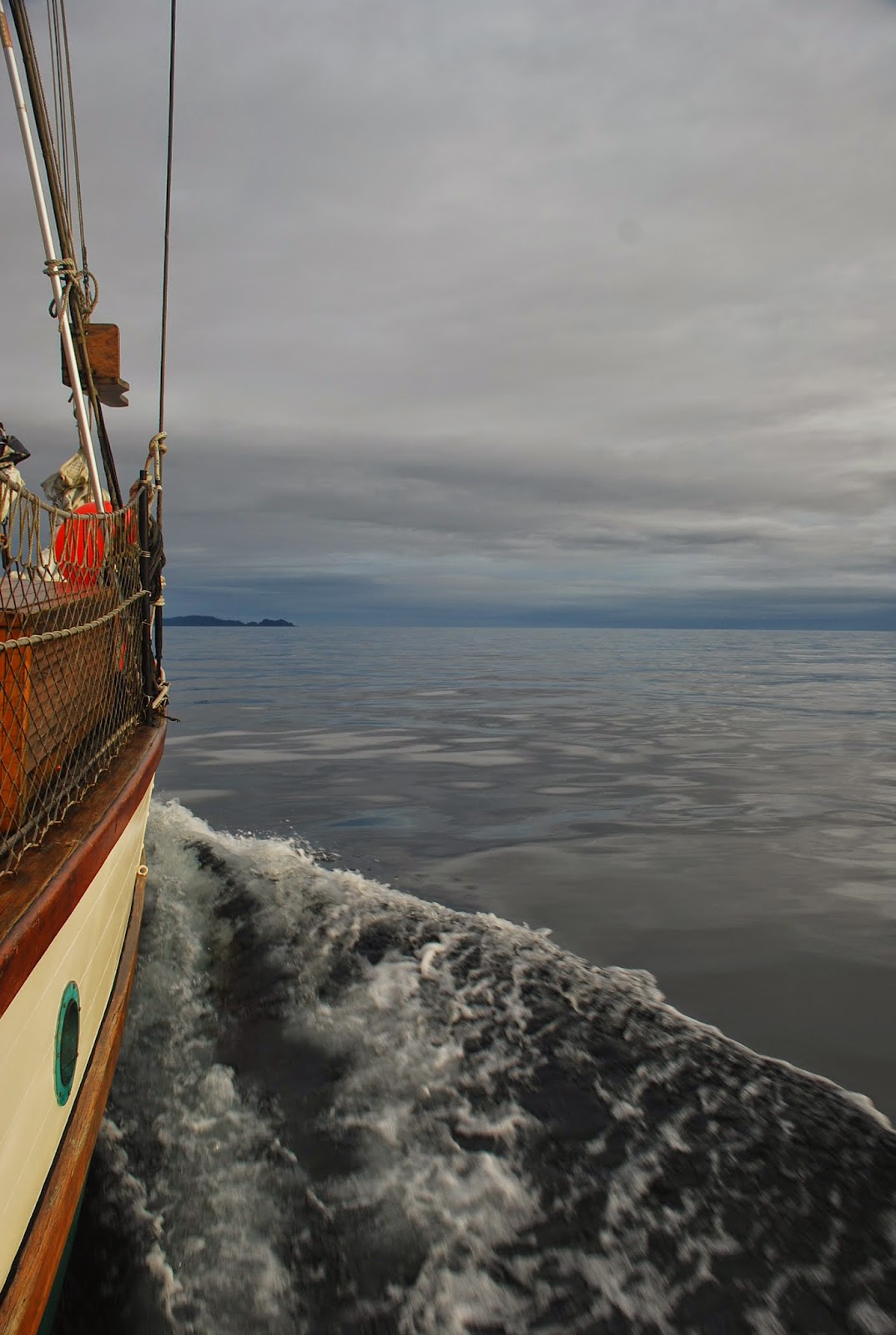 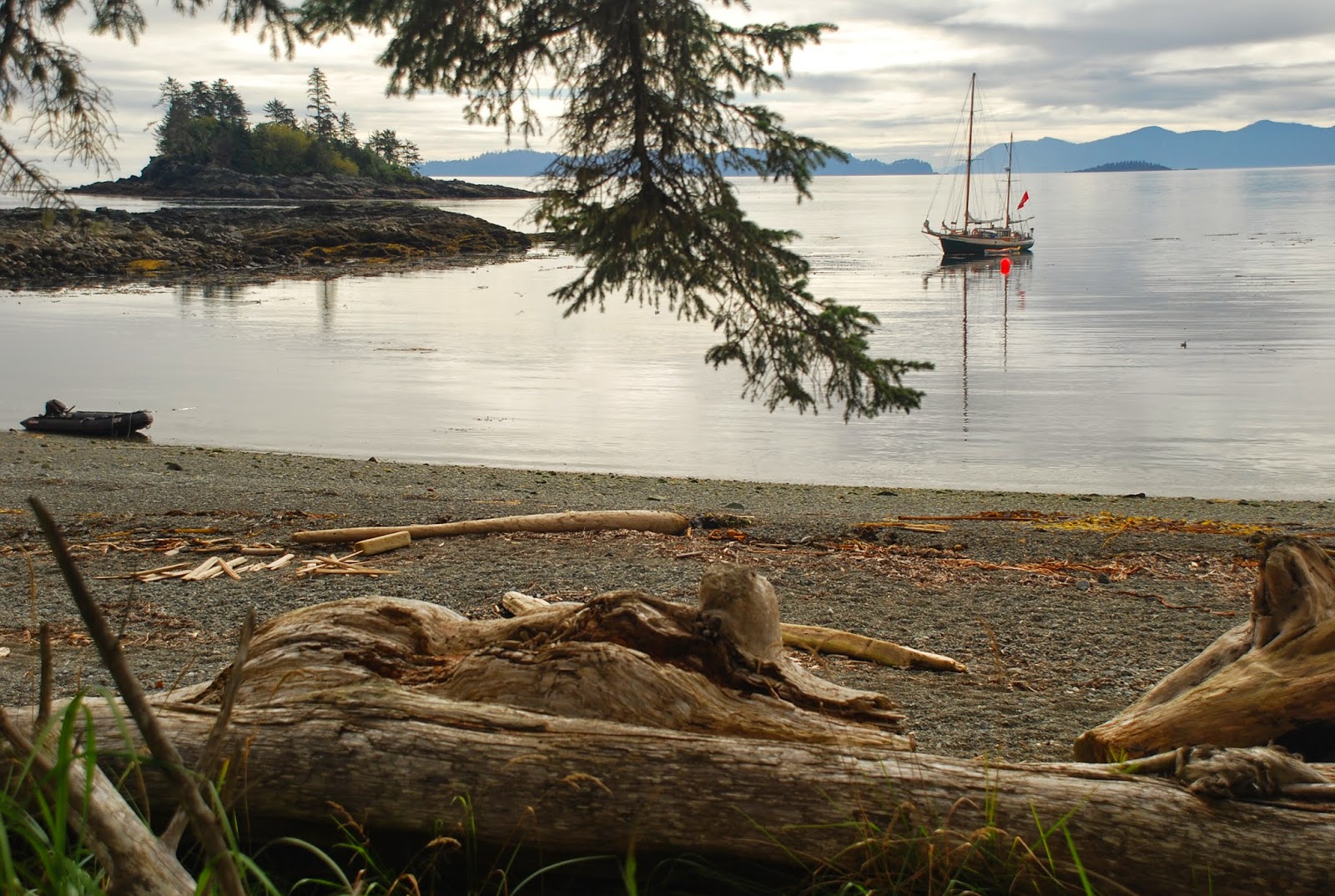 Aside: We had the great good fortune to be the only 2 guests on the sailboat, so we had the deluxe treatment. Bunks were in the bow, so our feet were slightly above our heads. This, plus the total darkness, turned my sleeps into blank unconsciousness. Jack on the other hand kept having bizarre dreams which he would promptly forget, but would wake in a surreal afterglow. Or maybe it was the Dramamine. He, unfortunately, was not born with the gene that let’s Garcia girls love all swing-set, swoopy, roller-coastery things. In any case, despite a foggy start day, which introduced us to the otherworldliness of the place, the weather gods blessed us. Day 2 included a 6 or 7 hour tack with all 4 sails unfurled, port-side gunwales buried in the waves. Anyway, back to Gwaii Haanas: When Teddy Roosevelt originally envisioned the National Parks system in the U.S., it included allowing the natives to continue living their traditional way of life within these areas. It didn’t happen, but this is some of what Gwaii Haanas tries to be. The only people who live there, outside of some grandfathered privately held parcels, are known as “Watchmen”. These are Haida people who hold the responsibility of on-site stewardship of the ancient Haida villages, now ruins, which are dotted throughout the park. They live in modern-ish cabins, with only radio contact to the outside world. No alcohol, no internet, no family, just a few other Watchmen for the duration of the summer.


Their job includes touring guests through the village sites and explaining some history, making sure the sites are cared for, but not preserved. While there’s a willingness to slow the decay by cutting grass etc., the notion of preservation has been rejected. Wooden things decay, the forest eats them up. That’s the way it goes. And goes quickly in the rainforest. Long-house sites are now most easily distinguished by the 4 trees, one on each corner, where a seed fell on an upright corner post, took root, and took over.


If they were living in the longhouses, things would be different. But the poles, call them totem poles, but that doesn’t seem quite correct; the poles have a life and a lifespan that will end. If people were still living in these places, the poles would fall, but a new and updated one would be carved and erected in its place. With no one present it makes no sense to erect a new one. The pole would have said who lives at this house, who they married, their ancestry, and anyone approaching would know whether or not they would be welcome. If no one lives there, what’s the point?

There is actually one new pole, the Legacy Pole, which was erected in 2013 to celebrate the 20th anniversary of the successful Haida fight to end clear-cut logging on Lyell Island.


Also, the notion of collecting or preserving things is not really a Haida thing.  Intellectual copyright, however, is incredibly important. The notion of dancing a dance, singing a song, or telling a story that is not yours is just not acceptable. I sympathise.  I’ve had the experience of someone telling me one of my stories, and I was quite quick to say, “That’s MY story!” Intellectual copyright seems to be a newer thing to western culture, but here it is ancient. Still, reading “Klee Wyck” by Emily Carr, I realize how quickly things have degraded since her time. Her descriptions of Tanu and the totem poles there make me wish I could see them as she did. But like the joke says, “Did you hear about the new Buddhist vacuum cleaner? No attachments!” Visiting Tanu, I am quickly brought to the real issues at hand. The captain of the Piraeus, Bill, had missed a dinner invitation by one of the Watchmen here. It’s a sore point. Hospitality is not readily rejected and it takes a lot of explaining as to why he needed to get his sailboat out of harm’s way of a projected storm. Mary is not entirely placated, but the sore point quickly has become a butt of a joke. It’s become a means to create further connection, and therefore commitment, between people. If I am obligated to you, then that means that we are a community.

An Historic Treaty Between Nations

On Saturday, while the rest of the world continued to fall apart, two groups of people with a history of warring, signed a peace agreement. A few outsiders showed up. The press did not. We were lucky to be amongst the outsiders.


It was a potlatch, held by the Haida Nation with the Heiltsuk Nation as honoured guests. It was done in a traditional way in Old Masset, Haida Gwaii. Jack and I showed up 30 minutes early in order to get a good seat, but seats were hard to find by then. We stayed for over 10 hours, until my sciatic nerve was demanding more attention than the Heiltsuk dancers. It was exhausting, but I felt like a wimp, seeing the elders, some quite frail, sitting there patiently through the ceremonies, while I snuck out. We heard later that it wasn’t over until 5 am.

I’d heard of potlatches, but never experienced one. It is a super-human endeavor on the part of the hosts. In payment for witnessing an important event, guests are greeted, fed, given entertainment, fed more, given gifts and fed. Did I mention that they fed us? The apples were just to get us over the munchies until the elk stew which held us over to the main meal. It was my first experience with herring roe on kelp, (k’waak? I think it was called) plus halibut, potatoes, rice, smoked salmon, and then dessert. And a “guest” is anyone who shows up. There is no sense of gate-crashing.
The peace treaty itself wasn’t the Israelis and the Palestinians, granted. These two groups haven’t been at war for a long time, basketball notwithstanding. They’ve intermarried, held other potlatches, worked together, but the formalized treaty symbolized a much larger notion. These groups have been treated badly by the powers that be for centuries. They are reclaiming the traditional ways, and finding power there. All the leaders, for example, both hereditary and elected, are great dancers. When anything of significance happens during the potlatch, people must dance it. (I would love to see this at City Hall, or Parliament Hill. If you make a motion, you and the seconder must dance it all around the circle.)


The significance of this treaty is a call to other first nations to do the same. By standing together their voices become louder and more powerful. The Haida’s effective control of their lands increases the volume of their voice as well.  Land and power go hand in hand, but the first nations assumption is that their treatment of the land and oceans would be more about stewardship than extraction. They’ve battled the logging companies on this land and see a bigger fight ahead about oil, gas, pipelines and tankers. A formal treaty can only help in that fight.
I’m sorry I didn’t stay long enough at the potlatch to get the gifts: a live baby cedar tree, a silkscreened copper print, and other beautiful and symbolic things. Ultimately, however, we gained something greater by simply witnessing this event.

Stop being a Chicken on Pink-Shirt Day

‘Everything I needed to Know About Bullying,
I Learned from My Chickens’

We recently added a new hen to our flock of chickens and went through the trauma that erupts when the order of the flock is disrupted. The ‘old guard’ chickens gang up horribly on the new one, and for anyone who’s ever been bullied, it’s difficult to watch. I think the reason I have such difficulty seeing this is because it's so familiar and so human. Everyone would love to think that we and our children are not just a bunch of chickens, but watching this situation play out, it’s difficult not to remember those days in the playground or the cafeteria.

Does any of this sound familiar?


Fortunately chickens can’t talk, so there’s no name calling, and fortunately chickens don’t log-on to Facebook. Maybe someday humans will behave better than a bird whose very name suggests cowardice and whose brain is no larger than half a walnut.

Meanwhile, the bullying got to be too much for me. We took the new girl out and sent her to a more accepting flock where she’s knows one of the other chickens. Hopefully they will be nicer in the playground there.