For Norah, a friend who may be going to Newfoundland,


The rest are just some of my thoughts about where to go in Newfoundland, starting near St. John’s, and only having a brief period of time. This is by no means an exhaustive list, only some places I enjoyed during my brief stay.  I think anyone would have good luck almost anywhere.

The Newfoundlanders are a different breed in terms of generosity and hospitality, so don’t be surprised when they invite you in for tea. Also don’t be surprised if there are no hotels or b&b’s in the very small places, they often don’t get a lot of drive-thru tourists.


One caution: a driving tip we were given, "If you see a tree, there's a moose behind it." I think more moose kill people on the roads than Newfoundlanders kill moose during hunting season. Do your part: eat a mooseburger. (Yes, I know I'm normally vegetarian, but these guys are out of control.)

First stops: Witless Bay & Ferryland
Witless Bay has a small roadside cafe called the Irish Loop Cafe that has a view to die for. There is also a B&B called Elaine's that looks lovely. We were still camping at this point, so I cannot vouch for it.

At Ferryland there is a beautiful short walk out to a picturesque lighthouse. There is a caterer at the lighthouse that lets you buy a gourmet picnic. (we were too cheap to do this, but here is the link: http://www.lighthousepicnics.ca/ .) There is also a B&B here, which I think is where you'll find the side by side Liar's & Gossip's benches. 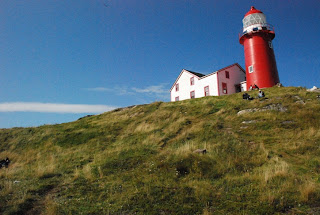 Cape St. Mary's
Cape St. Mary’s bird sanctuary (not St. Mary’s – that’s a town). A beautiful bird sanctuary located on cliffs on the southwest corner of the Avalon peninsula. You hike right up to the cliff edge and watch the birds there. Because they are hanging out on great spires of rock, with cliffs between you and them, they feel quite safe and fly very close. I’m not sure what would be gathering there in June. Wikipedia has an entry that gives excellent information and more photos.

The Bonavista Peninsula
Bonavista is so beautiful and we almost passed it by.  We went to Terra Nova National Park and one of the park rangers there actually turned us around and said you must go back. The hiking on Bonavista is better than in the National Park which is really known for being a sanctuary for birds.

Skerwink trail – close to the town of Old Bonaventure is a hiking trail that takes you out to the coast and has views of rocky seastacks.  All the edge of Newfoundland is basically one big cliff, so you get some really thrilling views. Since June will probably be iceberg season, you’d likely have a good chance of seeing some off of here. 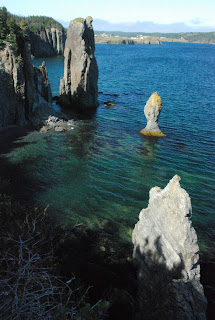 Trinity
Beautiful and charming. Has a theatre, good restaurants and b&b’s. Don't expect to be the only tourist there
(just do an image search in google for ‘Trinity, Newfoundland’ and you’ll get a sense of it)

Elliston
Like most places in Newfoundland, we found Elliston by accident. It is near a puffin colony, but if you're not in puffin season, it's wonderfully quiet. We had a meal in an old converted heritage church. There is a B&B here as well. (There may be more). 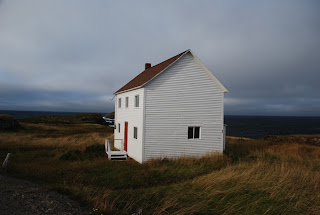 Cape Bonavista & the town of Bonavista
The cape is gorgeously rocky and would have great viewing of icebergs. The horses run freely and chase tourists since they know we carry treats and are suckers for charming beasts (the 'charismatic megafauna effect'). 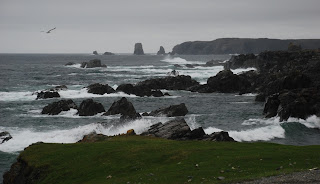 Bonavista itself has a rebuilt version of John Cabot's ship the Matthew and is worth seeing. (Wikipedia has contradictory entries that says both that the replica of the Matthew is housed here and was sailed back to Bristol for the Queen's diamond jubilee. You'll have to check for yourself.)  I had no idea that John Cabot was an Italian whose real name was  Geovanni Caboto. I think there is also a Marconi site at the Bonavista lighthouse, but I may be remembering that incorrectly. In any case the Italians seemed to figure prominently in Newfoundland history. And the lighthouse sites are wonderfully windy.

Fogo Island:
I could torture you with photos of Fogo Island & Twillingate, but I'm afraid these are a bit far afield for the amount of time you have. 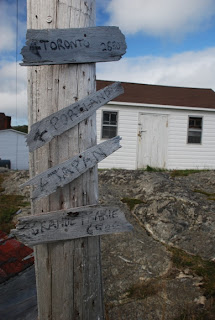 Remember, if you do take a wrong turn, it may be the highlight of your trip.

Books to read:
'The Shipping News' by Annie Proulx, 1993(?)
'Rare Birds', Edward Riche, 2001 (?)
Both of these show the wonderful Newfoundlander humour & both have been made into excellent movies.
'Random Passage', Bernice Morgan. Fictionalized account of some original Irish settlers & how difficult their lives were. (This unfortunately, was made into a terrifically terrible movie)

Link:
Iceberg tracker! Let's you know where they are now.

Food:
As I mentioned previously, if you love salads and fresh vegetables, there's lots of that when you get back to Vancouver Island. While you're there, Eat a moose.