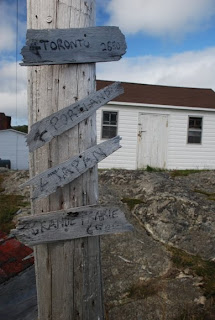 All across we've been asked, "S'where you visiting from?" Here, as in , it's obvious at a glance that we are not from here. So when a man asked me a question that I couldn't decipher, it took a few tries to get beyond the accent and discover he had asked, "Where do you belong?" 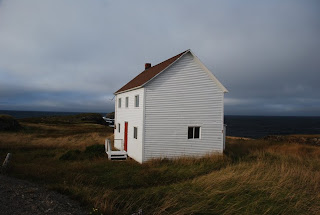 It's just another way of saying "where are you from?" but the implications are different. Implied, obviously, is that I don't belong here, and by extension, he does. "Where do you belong" is a good question. I’ve been reading a book called, 'Leaving Newfoundland' that discusses the out-migration that is happening, and that has always happened, here in . The thesis of the book is that settling here has always brought with it the need to go 'Away' in order to make a living. 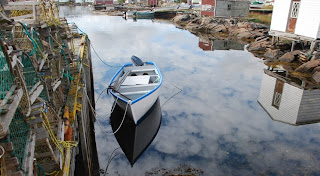 Ironically, for a population that has been so migratory and readily pulled Away for income, the people are more rooted to this place than anywhere else we’ve been in . The word 'Away' in needs to be capitalized, since the notion of being away has become a place in itself. In , anywhere outside of is called, 'Outside.' In , anywhere outside of is 'Away.' Both indicate that there is a place to return, and that there is a home waiting for that return. 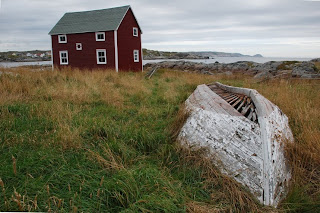 We are now in the town of on . It is a place with Irish roots. VERY Irish roots. I had first thought my eyes were tricking me when I saw the flags flying. The flag (republic of, not official provincial) is vertical stripes of green, white and pink. Here the flags were green, white and orange. Later, I learned this is the flag of . 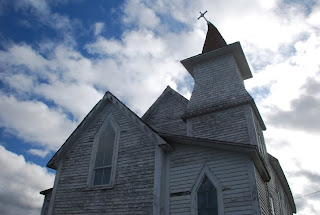 Our timing was good since we lucked onto the Tilting Feile. This Feile is a weekend of workshops and celebration that has included bringing over people from and sending locals to . They have even set up a local radio station in the Church Hall for 5 days, and are encouraging the locals to come in and sing, read poetry or share stories. I'm sitting in the church hall now. It's warmer than the van, especially as the rain pelts down and the wind comes in off the ocean. It smells better too, as yeasty and chowdery smells float in from the kitchen.

I am listening to the rookie DJ read an email from a Newfoundlander who now resides in . A part of the email reads, of course, “but Tilting will always be my home.” 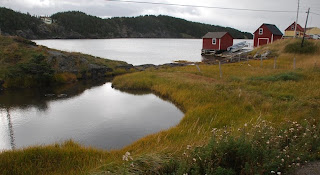 So I am left asking myself, where do I belong? I belong here in for now. I belong in the van, such as it is. In the long term I believe I belong in , and definitely with . But I was born in , grew up in , moved to and then to . Most of the people I know in Victoria are from somewhere else. I have a dual citizenship which implies my ambivalence about where I belong, and leaves open my choices of where I might live in the future. It even leaves open the idea that someday I might find myself living in . 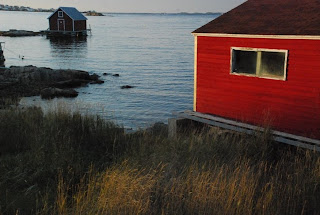 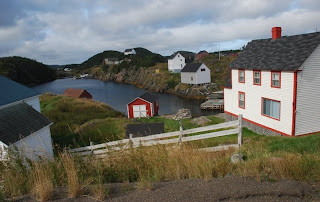 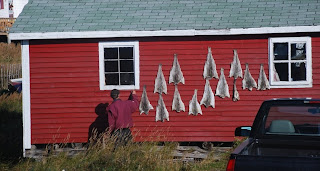 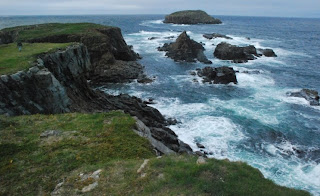 Tilting- sea on all sides: 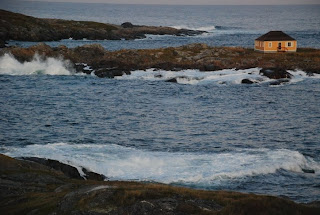 The only mean Newfoundlander we've met: Didn't the bears used to do this in Yellowstone?: 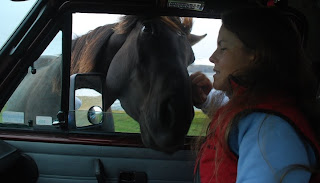 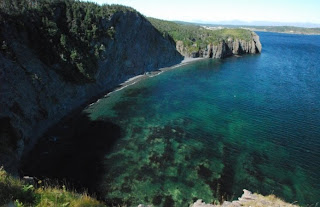 A benefit from our car troubles upon entering Newfoundland was that we had immediate contact with local people who are not engaged in the tourism industry. The impression has been that uniformly, everywhere, people have been ridiculously good-natured, helpful and kind to us. "Whar ya fromme?" starts many a conversation. Now everywhere in Canada people have been good to us, but Newfoundland seems to take it to a different level. It's almost weird and takes some getting used to. It almost feels like we are in some kind of 'Truman Show' where someone is following us around and putting people in our path to show us around. 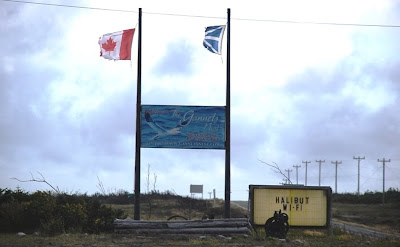 Last night, we arrived at a tourist information centre too late. We were standing in the parking lot looking lonely and lost for 15-20 seconds before a man got out of his car and announced, "You need information now do ya? I know everything there is ta know about dis place." (I'm sorry I can't type the combination Newfoundland & Irish accent) His name was Michael O'Riley and he told us the best outfit to take us whale-watching (O-Briens - alas, no whales), and where we could camp for the night. "Ya know about campin' in Newfoundland don'tcha? Ya don't pay for the campin' in Newfoundland." He first told us, then drove us to a good camping spot where, "the cops'll look after ya and make sure nobody hassles ya." Yes, the cops in Newfoundland will look after you if you are illegally camped somewhere and make sure no yahoos ruin your tranquil evening.

I had expressed concern that I hadn't had a shower for several days and was looking forward to one. Michael O'Riley just said, "Well there's the pond right there, you can just jump right on in no one will stop ya." Jack said something sarcastic about the ice forming around the edges, and Michael O'Riley responded quite seriously, "Oh no, the ice left long ago. It's got to be a good 4 to 5 degrees in there by now." And he was right. It did feel like about 4 to 5 degrees, but it was wonderful to have clean hair again. Jack stayed in the van playing with his i-phone. Then later he fixed dinner for me as I sat shivering in the back of the van with wet hair. (My desperate search for heat resulted in a new all-Canadian cocktail: Maple wine mixed with Crown Royal. Yum.) 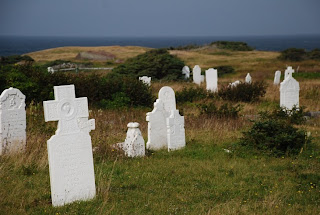 These people for the most part have little reason to be upbeat. "When the cod left, that's when everything else went," we were told by a restaurant owner who was waiting her own tables. Yet everywhere we go people are quick to laugh and give some optimistic advice. They are cheerful and always joking around with each other.

I think the secret is that they don't take themselves too seriously. How can you paint all the rocks in your landscape in 64 crayola colours, or install plastic flowers in the garden without having a tongue firmly in cheek? Or the red plastic roosters mounted on each and every fencepost around a 2 acre property. Or the entire miniature village complete with miniature clothes-lines with miniature laundry drying in the wind. 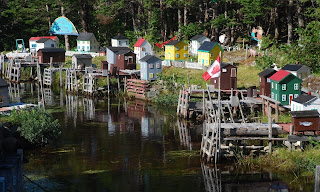 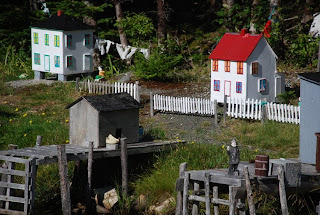 Or the plywood cutouts of dogs, cats, cowboys, moose. Or the whirligigs of old-men rowing in the wind, of Canada Geese flying, of characters waving, of anything that you can imagine whirling, well, whirling. Although at a small graveyard we did see a grave that caused me to pause. It was for two brothers who had died in a boating accident in full view of their brother on shore. A tragedy for the family and for the small community. The gravestone was sober, but the entire area was covered in Astroturf, had two fanciful wooden boats and a solar powered miniature lighthouse. Whoever did that had to be able to see through their own tragedy to the sense of humour of the deceased. 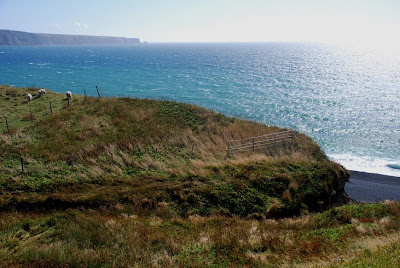 If you have had an unfriendly encounter with a Newfoundlander, I don't believe it, and if Michael O'Riley was laughing with his friends about the BC hippies out on highway 10 swimming in the pond, well I don't want to know about that either.

But if I were a Newfoundlander, I think my inner curmudgeon would eventually come out. I think I'd start complaining about the weather and saying, "My tomatoes won't ripen, and I wish the hell that the tourists would stop taking pictures of the damn laundry."

When Clean is Just Another Shade of Filthy...Westfalia Living 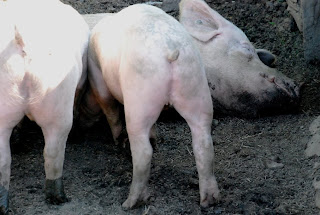 Sorry that (other than this pig) there's no illustrative photos for this blog, but until your computer has scratch and sniff capability, photos wouldn't do it justice anyway. I'm just going to find some pretty pictures and stick them in randomly. 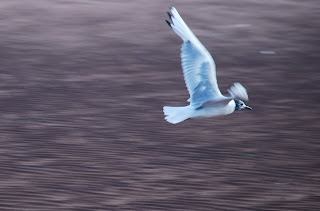 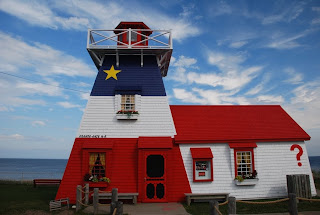 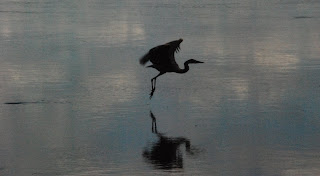 We are now in Newfoundland and yes, there actually is bologna on the menu, but I thought it was time to talk about Westfalia living. Rosalita has had a few quirks from the outset, but upon arrival in Newfoundland we had no headlights, no ability to open the windows and no windshield wipers. We've spent the first 24 hours here within a few miles of the ferry terminal and closer still to Matt's Auto here in Placentia Newfoundland. 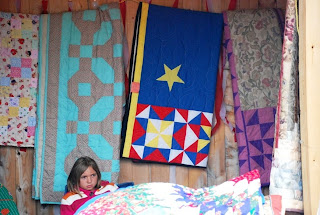 But life in Rosalita is more than how well she is or isn't running. It means living in close quarters to each other and getting used to the realities of having no real electrical or water infrastructure. This means we have a sink, but no water or sewer lines unless we are at an RV park (never). This in turn means that we are very water efficient and even more soap efficient. I think we have actually given up on soap for the most part. 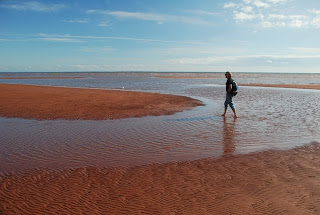 Take for instance my stainless steel "wineglass." Each evening I enjoy a glass or two, and in the beginning, I would use a little soap and water to clean it up and dry with a tea towel. Then later I would just turn it upside down on a picnic table so that it could dry overnight. Then later still, I would get lazy and go to bed and do this in the morning (nothing dries overnight anyway). Then I decided it was just wine so it really didn't need soap. This morning I just put some water in it to slosh it around and dissolve the old wine, drank the water, and put the glass away wet. I suspect Jack of licking off the spoons and putting them away, but I'm not sure.

Now imagine all of our dishes in somewhat similar fashion. 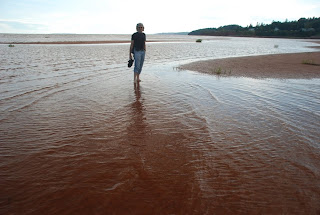 A few weeks ago, we opened the side door after a hike, and the smell was more than just a little revolting. It was sort of an ode du dirty wet socks, rotting fruit and something molding. In the van there is a piece of carpet laid over the VW carpet, and both layers were wet and mildewing. Besides that, the refrigerator does not really keep anything cold. It can sort of keep things cool, but it barely slows the decay as compared to keeping something in the glove compartment. We took out the rugs and dried them as best we could, got the really ugly stuff out of the fridge and today, finally, we're doing the laundry. We're even washing the tea towel for the first time in 8 weeks.

Parks doesn't have the budget for horses... 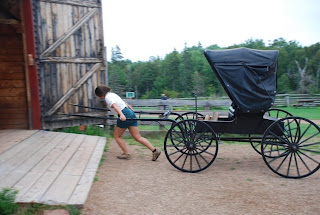 I haven't had a shower in 3 days and that seems normal too. But when I do get one, I'm sure I'll feel so smug. 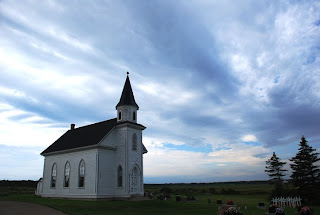 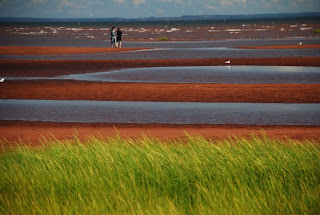 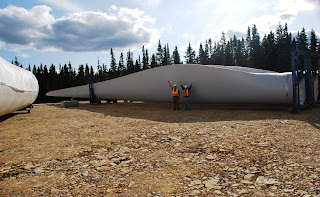