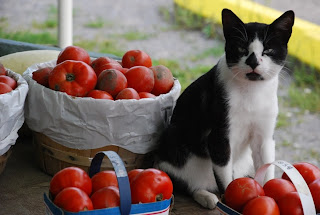 We have come across so many ironies in our travels, that I am considering just making a list of them all. Maybe that will be a future blog. The one that’s been on my mind for a while is about food.

We have just spent a delightful few days with friends at their “cottage” in the Laurentians in Quebec. They are foodies and the experience was delicious. Crêpes, Montreal bagels and baguettes, cheeses to die for (including one called “Anglo Saxon” - I don't even want to know why), local wine, beer and cider, espresso, homemade gazpacho, and throughout it all, glorious fresh fruits and vegetables. We had a similar experience with friends in Toronto and again in Ottawa. Actually in Ottawa, as I gazed up agape at the chalkboard menu of a funky organic restaurant, my friend Lisa said I looked like I was seeing a DaVinci painting for the first time. 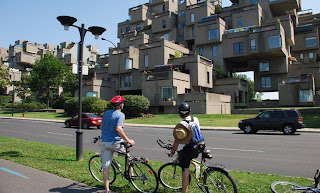 This was because we have spent a lot of time in small rural Canadian towns, and here comes the irony. In small farming communities, you won’t be served fresh fruits or vegetables. There will be lot’s of fried options, there will be both kinds of bread (“white or brown?”) there will be Coca Cola, but the only thing vaguely green will be a pale piece of iceberg lettuce. I finally realized that places that advertise themselves as serving “homestyle cooking” don’t bear any resemblance to what my friends or I would cook at home. 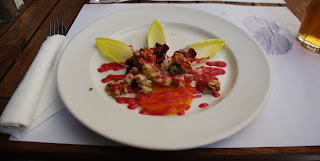 I’ve read that a low income is a strong indicator for an unhealthy weight. And while I have found that restaurant prices may be slightly higher in high rent areas, the difference really hasn’t been significant. That may be because the deveggified restaurant food tends to come in huge portions. The rural restaurant portion sizes assume that I will be spending my afternoon tossing around 50 pound bales of hay or pulling a plow through rocky prairie soil. The result of this kind of eating, along with all the sitting involved with driving across the country, is a couple of British Columbians who are having more difficulty fitting into their trousers. 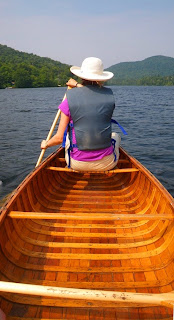 But it’s not just us. As we have travelled across the country, the experience has been quite similar everywhere. There are a lot of fat people in the country and a lot of slim people in the cities. Part may be fashion consciousness, but as I witness people using their ATV to get down their driveway to empty their mailbox, I can’t but come to the conclusion that the whole rural work-hard ethic doesn’t really result in getting physical activity. It’s just too easy to jump into the car. And in the cities, it’s a pain in the ass to jump in the car. Just try to find parking, and when you do it’s expensive.

A Toronto dirt-filled sedan – a use for cars in the future? 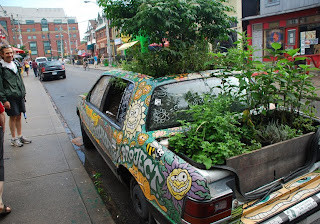 an Ottawa artist gets his exercise balancing heavy rocks 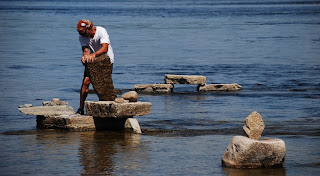 Or is all this just my own snobbishness? Is expecting greenery beyond coleslaw at a meal just another form of elitism? A woman told me she was a “coffee snob too” when I asked if espresso was available anywhere in town.


We've just headed into a more rural Quebec, so I'll be able to see if the theory holds. After all, everything sounds better in French. 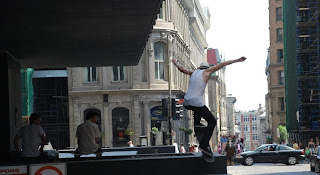 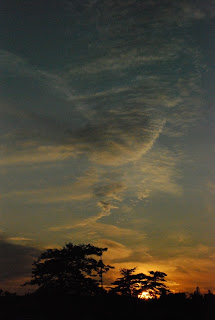 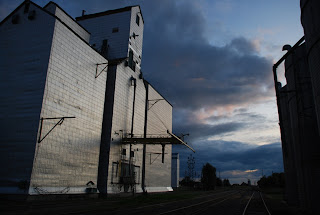 In his book, “Beauty Tips From Moose Jaw,” Will Ferguson’s thesis is that is not a country, but a clump of otherwise unrelated outposts. Yes, I just put Will Ferguson and the word “thesis” in the same sentence. It makes it seem important. In any case, our last series of encounters with various groups of Canadians, have brought me to a similar realization. We all imagine that we are somehow different or unique within our little communities.

If you're a Mennonite: is it a sin to be proud of your bull? 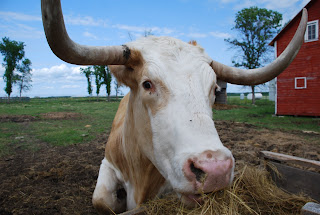 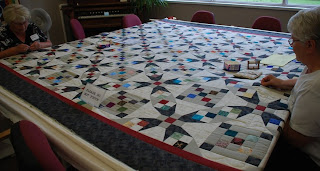 We visited the Doukabours, who moved here from to continue their culture unimperilled by the Tsar’s Army. As previously mentioned, we spent some time with cowboys, who would prefer to continue their lifestyle unimpeded by government, oil prices, enviros, and god-damned vegetarians. We spent some time with the Métis, who developed a unique blend of French voyageur and first nations culture, but who are now a culture of their own. (How can you not like people who can fiddle and jig, make bannock, hit a target with an axe, make beautiful functional things, and survive on boiled muskrat?) And we visited the Mennonites, who imported a European culture to , again to avoid persecution and harassment. 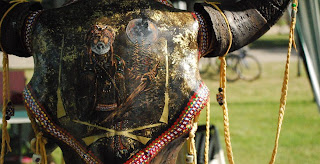 Hitting a quarter at 20 paces: 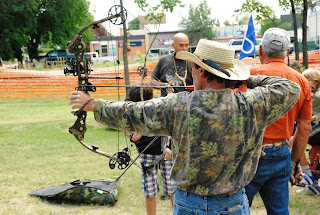 Caution: Objects in Mirror are Closer Than They Appear 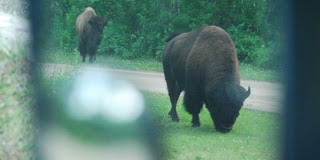 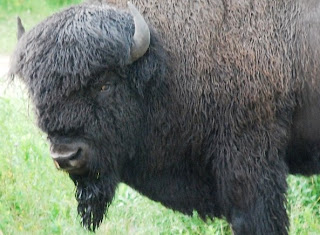 Then there are the fervently non-Canadian “Northwest Angle” inhabitants. Not familiar with the Northwest Angle? Go to the most southerly portion of ’s eastern boundary. Surrounded by the Lake of the Woods, there is a peninsula off of , not part of , that is actually part of . It’s the most northerly point of the contiguous . Here in a weirdly American way, these people have developed their own lives, unimpeded by, well, anybody. 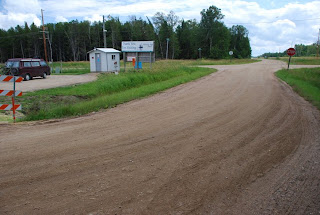 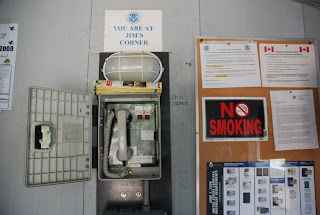 Aside: The border crossing into the Northwest Angle is bizarre. For one thing you need to go down about 100 km of dirt road to get there. Then you see the sign, "Welcome to the United States." Further down, the next sign, " YOU MUST CHECK IN WITH THE US AUTHORITIES TO ENTER THE US". Further down, the next sign, "US IMMIGRATION AND CONTROL AT JIM'S CORNER." Then, "JIM'S CORNER 8 KM." so you're basically an illegal entry for 8 more km. Then you get to Jim's Corner, which is, a corner, a crossroads of 2 dirt roads and a little white shack. In the shack is a telephone. Press the left button to call USA authorities. Press the right button to call Canadian Authorities as you leave. Homeland Security is hard to take seriously in these circumstances. We brought our passports for this?

Back to the most important subculture of all: the lonely Westfalian’s who, after several dry provinces finally in Ontario see another couple driving a Westfalia and go crazy waving and honking.

I was beginning to think that each of these groups was good at seeing how others had impacted their lives, typically negatively, but had a blind spot regarding their impact on everyone else. The cultural museums that we visited showed each group's struggles to survive in a harsh landscape and showed their beautiful crafts and ingenuity. But a lot of these groups were living within the same territories and I wondered how did the (fill in the blank) feel about these newcomers who settled these lands.

How baby Kleenex are made: 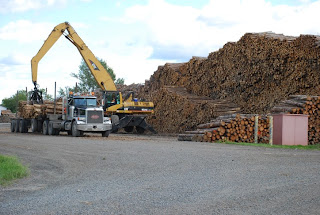 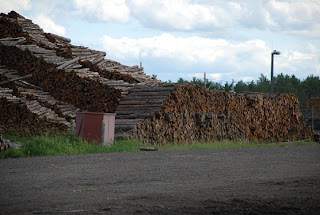 Then our entry into greeted us with an endless series of “trading posts” which sell large quantities of tacky plastic things, chocolate fudge, dead animal pelts, indian crafts, and large wooden carvings of “Indians” with less than intelligent facial expressions. All of which may appeal to you if you happen to be an undereducated fat white guy toting a gun but unsuccessful at hunting. Otherwise it’s all a bit alienating. I had the feeling that these places were ignoring everyone. But then again, maybe they thought of themselves as pioneers starting up their own businesses etc. 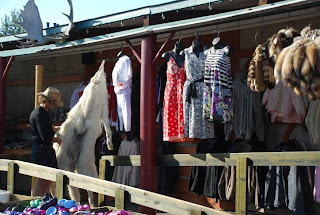