Jack & I had talked about getting some backyard chickens for a while. Having pets that laid eggs sounded wonderful, and there were already several coops on the street.
This spring we had an opportunity to share in chicken ownership with some neighbours, a ‘coop co-op’ if you will. We’d get the birds as baby chicks that had graduated from incubation in an elementary school classroom, then we’d raise them in a coop in a neighbour’s yard across the street. Nothing ever goes quite as planned.

The farmer who graciously donated the eggs for the class, gave us 2 dozen fertilized eggs in a great assortment of colourful breeds. The incubator in the classroom, however, only had room for 18 of them. We tried and failed to find room in another incubator in the area, before deciding to do it ourselves. No, I didn’t strap 6 eggs into my bra for the 21 day incubation period, but maybe worse, stuck them in the oven. We fiddled with the temperature for a few days before putting the eggs in.

(To the chicken experts out there: no, we didn’t have the oven on, just the right combination of wattages of oven lights, and yes, we provided ventilation and proper humidity, and yes we tilted the eggs 5 times per day etc.)
We spent the next 3 weeks babysitting the oven to ensure that the above was monitored properly.

In the morning of June 1st, the English Sparrows that crowd around another neighbour’s chicken coop were louder than normal. It took me a while to realize that the chirping was actually coming from the oven, from inside one of the still-intact eggs. Human babies scream after they come out, but apparently chickens do it to announce that they are about to arrive.


Within 30 minutes, “June” had arrived, sprawled out on the floor of the box we’d prepared. Two hours later, “Bug” joined him.

But the rest did nothing. After 48 hours, when all hope was lost, we removed the remaining 4 eggs. I opened one, to try to see what happened, and found a little chick who was perfect, beautiful and quite dead.


We fell in love with our 2 little ones. There was no way these birds were moving across the street. We wanted them to be OURS.  Two chicks, however, is not a flock, so we got 4 more from the same breeder. We then proceeded to brood them in our dining room. Jack frantically built a coop, but not before we had a real “Green Acres” situation inside the house. 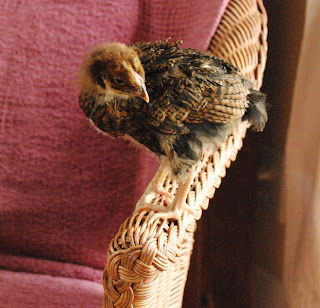 Dorian (so-named because he was grey, beautiful, and, while friendly to us, not particularly nice to the other chickens) was the one who liked to perch on me. If I lowered my head to clean out a cage, Dorian would be the one to jump up onto my head, or neck or perch on my shoulder. 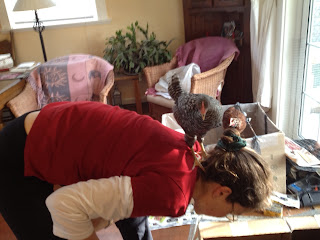 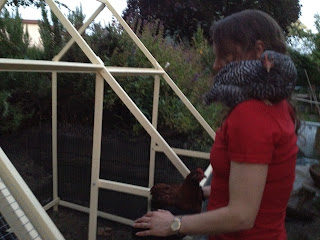 He was a unique character, charming, adventurous, smart, and beautiful. He was my friend. Right up to the moment that I drew a sharp blade across his throat. Me sobbing.

He was the first of 3 cockerels (so far) who had to go. It is illegal to have roosters in the city, and even if I could keep them, a ratio of 12 hens to 1 rooster is about the minimum.  About half of all chickens are born roosters. You do the math. The world is awash in unwanted roosters. In commercial operations that produce laying hens, the chicks that are hens are put on the conveyor that sends them to boxes that are sent to commercial egg producers. The baby roosters are put on another conveyor. No one wants to know where that one goes. Considering that hens naturally live 10-15 years or more, but are ‘good’ egg producers only for about 18 months, well, you don’t really want to know where the chicken in that noodle soup comes from either. 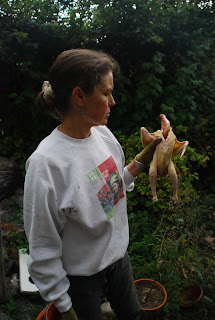 While we all say we want to know our food, and where it came from, I think few of us really want to know our food personally. Know their personalities, habits, charms and faults. But if I don’t love my chickens, don’t give them treats and names and observe their unique personalities, it doesn’t mean they are any less unique individuals and deserving of love. It just means I missed that opportunity.


Have a happy Thanksgiving. I know that this year we will be giving personal thanks to Dorian, June and Patience.  I hadn’t eaten chicken in years before this adventure, but today they will be given centre-stage on our table.
Posted by Lori at 3:14 PM