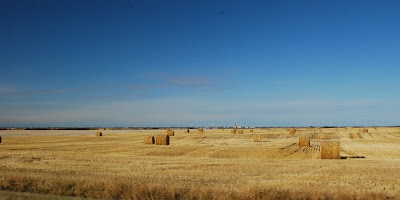 We had the "good fortune" to be in Saskatoon when "W" came to town.

We had heard there would be a protest at the site where he was speaking, and we wanted to swell their numbers by two. When we arrived, we found a few people milling about, but other than 3 old ladies with an unreadable sign, most looked like they were there to actually listen to W speak. (The whole idea of 1. George W Bush putting together actual sentences, and 2. someone wanting to listen to them, is unfathomable and I'm sure covered in someone else's blog.)

Kandahar Saskatchewan that is.
The bombed out looking building is a dilapidated decommissioned school. 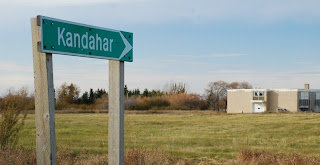 Meanwhile, I was not sure to be happy that no one thinks W is worth protesting, or depressed that no one cared. Expressing this to my neighbour, she said, "Oh no they are gathering at the farmer's market and all coming together."

Does the farmer lean to the right too?

The interesting net affect was that I was standing on the "secure" side of the barricade when the protesters did arrive. By then, there was a huge long line of people waiting to get into the show. They were mostly white men wearing crisp white shirts, black leather jackets, shiny black shoes, and expensive jeans: the chamber of commerce type. (sorry Rob). 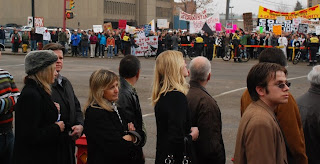 On the other side of the street, behind another barricade, were the protesters, wearing a colourful assortment of woolies, with banners, signs etc. 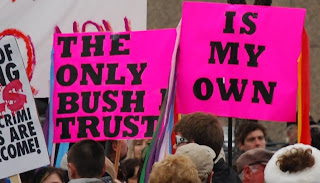 Because I was wearing a worn Gor-tex jacket, and was carrying a largish SLR camera, everyone must have assumed I was a journalist (as in, a REAL one.) A note to keep in mind if you ever wish to get behind a barricade.

Of course, W was escorted thru the back of the building and was never visible, let alone in reach of the few shoes that were thrown into the middle of the street, or within reach of the imaginary pie that Jack dreamed of tossing. 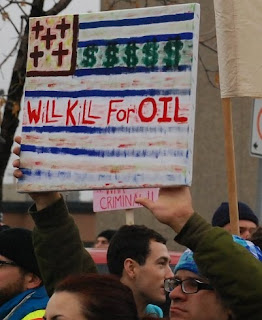 In any case, after taking a photo of the 3 elderly women, who were escorted by police to the correct side of the barricade, I was left with Global TV and an assortment of photographers who ignored me. Jack had left by this time, since this side of the street had become "the enemy." The feeling of discomfort at being left there was overwhelming in me. I wanted to ask some people why they had spent $150 each to sit and listen to this person. What did they really think they'd learn? But I found I was too lazy or too scared to ask the question. 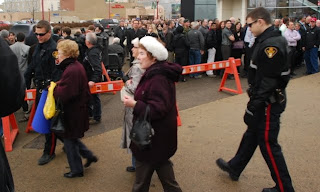 One of the loudest protesters had a megaphone and was insisting that "911 WAS AN INSIDE JOB." I didn't want to associate myself with this wingnut either. I thought it was unfortunate that the W-supporting wingnuts looked so reasonable. And then another protester tried to start a fight with an attendee who was smiling. So much for give peace a chance.

So much of our world is groups of people separated by barricades and lines, physical, mental, ideological. So much energy spent just trying to move those barriers around and saying, "We want more room on my side." On this trip I've been talking to hunters, loggers, chemical farmers; people with whom I would have thought I have little in common. But by talking with them about their passions, I've found that I do.
Round-Up or not, it's still beautiful

Finally I politely moved thru the lineup to the middle of the street where I stood, as usual, in the middle, thinking what a great metaphor this was. I also determined that I was invisible, because other protesters standing beside me were escorted by police back to behind their barrier while I was left alone.

In the end I did decide that I had to take a side, so I made my way to the protesters, having decided that the non-wingnuts need to be loud too sometimes. 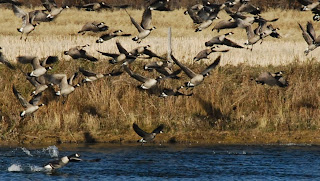 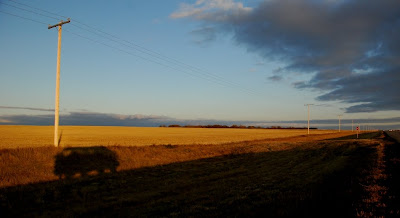